How a California Tech Company Went from Gaming to Life Saving

December 22nd, 2021 – Newport Beach, CA – It all started with blood-soaked sand in a remote forward operating base in Kunar Province, Afghanistan, but none of the founders of 2B3D Inc. knew it at the time.

“I got involved with crypto shortly after the market crashed,” Bell explained. “As an early investor in NFTs, I realized the potential, but there was also no easy way to show off these digital works of art. I knew there was a better way.”

Bell launched his own NFT marketplace in 2021, intending to create virtual spaces where NFTs could be genuinely appreciated. He reached out to a childhood friend, Andrew Bjarnsen, to help develop NFT galleries.

Bjarnsen graduated from Laguna College of Art and Design with a master’s in fine arts in Art of Game Design. His University of Southern California team had developed an “electrifying VR rhythm game” called Super Nova, which was selected as a finalist for the 2018 IEEE GameSIG Showcase in 2018, according to LCAD. This game laid the groundwork for Bjarnsen’s gaming studio.

“We started talking about his video game projects and my NFT marketplace, and we decided to combine the two,” Bell said.

Bell and Bjarnsen founded 2B3D Inc. to develop a VR metaverse filled with NFTs using their combined marketing, cryptocurrency, and game design expertise. But why stop there? They also wanted to make a difference in the real world, and for good reason.

Bjarnsen had recently returned from a U.S. Army deployment in Afghanistan, serving as a combat medic.

“I quickly recognized that something had changed in my friend,” Bell said.

Like many veterans returning from Afghanistan at the time, Bjarnsen had difficulty recovering after experiencing a traumatic event. The condition, known as post-traumatic stress disorder, could last months or years, with triggers that bring back memories of the trauma accompanied by intense emotional and physical reactions. Other symptoms include nightmares, unwanted memories of the trauma, avoidance of situations that bring back memories, heightened reactions, anxiety, or depression.

Veterans who have seen combat or feel isolated are the most vulnerable to thoughts of suicide. Twenty to 30 percent of veterans who commit suicide also screened positive for PTSD. Many more go undiagnosed.

Bell immediately thought of his friend.

“Honestly, my ‘aha’ moment was when I looked at the 580 veteran suicides last year,” Bell said. “When I wrote that number down and really did that math, that’s when something changed in me. I no longer wanted to make something that was just fun or cool, but something that could help heal and save lives. I knew it needed to be done as fast as possible.” 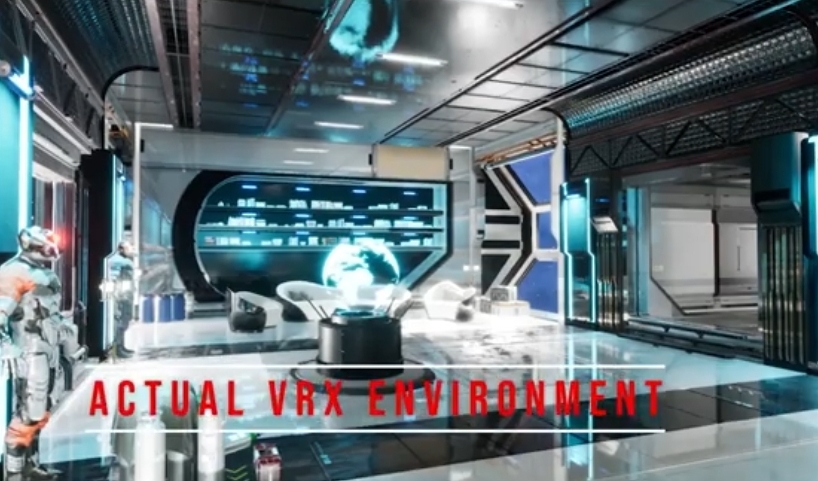 VR therapy, or the use of VR technology for psychological or therapeutic rehabilitation, is backed by more than 25 Years of scientific research. The Office of Naval Research believes VR therapy, with its game-like qualities, could resonate with the current generation of warfighters. According to the U.S. Department of Veterans Affairs, video games can help veterans recover from post-traumatic stress.

In an open clinical trial of VR therapy by the Office of Naval Research, veterans with PTSD experienced a 56 to 90 percent drop in stress response measurements. Another 46 percent of veterans no longer screened positive for PTSD after receiving treatment in VR.

“I get phone calls from strangers who are desperate for this solution,” Bell explained. “Once I realized that every day closer to our goal has the potential to save hundreds of lives, I stopped sleeping as much. I knew we had to get this done.”

With VRx preloaded on VR headsets, veterans with PTSD could step into soothing virtual environments integrated with neurocognitive mini-games designed with data points using research-backed by neuroscientists and neuropsychologists.

Additionally, 2B3D has partnered with the veteran-owned and operated nonprofit Forge Forward Project to conduct a peer-reviewed study of VRx using the most advanced imaging and testing protocols in the world. With six different cognitive tests performed inside MRI machines, neuroscientists can measure the effects that their VR games have on neurovascular coupling, which is the connection between neurons and blood flow in the brain. By processing more than 7000 near real-time images of the brain and comparing them to a healthy control database, Forge Forward Project aims to show how, exactly, VRx’s neurocognitive mini-games jumpstart the healing process in the brain.

Veterans will also be able to use VRx for socialization, community building, and connecting with crisis response managers or mental health therapists in a safe virtual space from anywhere in the world.

2B3D is the first tech company of its kind to use virtual reality technology to provide peace and healing to veterans for free. VRx is currently under development, with alpha tests starting early 2022. They are currently seeking investors and major partners in this effort.

Visit their GoFundMe campaign to learn more or donate:

“I know we can do more,” Bell said. “We now have the research and expertise to make a real difference. It’s time to end veteran suicide. Because we should.”

November 16th, 2022 – Data Bridge Market Research analyses that the herbal medicinal products market is expected to reach a value of USD 177.65 billion by the year 2029, at a CAGR of 6.83% during the forecast Read more…