PaTRAM Institute to Record Next CD in Saratov, Russia, Accompanied by the Wonderworking Kursk Root Icon of the Mother of God

August 21st, 2019 – Fresh off their GRAMMY nomination for their CD, Teach Me Thy Statutes, and their newly released CD, The Divine Liturgy of St. John Chrysostom, the PaTRAM Institute will record their next CD in Saratov, Russia, this summer. The new CD, entitled More Honorable Than the Cherubim, is a compendium of hymns to the Theotokos by various composers, which will be sung by a fifty-six-member male choir. The singers hail from Russia, Serbia, North America, and Australia. GRAMMY-nominated Maestro Vladimir Gorbik will conduct the choir, which will include an unprecedented ten octavists, with baritone Michail Davydov as the featured soloist. On August 22nd, 2019, the choir will perform their repertoire in concert at the Saratov Conservatory.

The PaTRAM Institute Male Choir will be in Saratov for rehearsals and the recording of the new CD from August 20th-26th, 2019. The CD will be recorded at St. Nicholas Monastery by multi-GRAMMY Award-winning production company Sound Mirror. Sound Mirror has received more than one hundred GRAMMY Awards and nominations for their body of work. PaTRAM is thrilled to be working with them again to create a professional quality CD that brings the beauty of Russian choral music to a Western audience. Reference Recordings, a multi-GRAMMY Award-winning record label based in San Francisco, will print and distribute the completed CD.

With the special permission and blessing of Metropolitan Hilarion, First Hierarch of the Russian Orthodox Church Outside of Russia, the Kursk Root Icon of the Mother of God, considered by the Orthodox Church to be wonderworking, will also be traveling with the choir, accompanied by Bishop Nicholas of Manhattan. The icon will be in Saratov, Russia, from August 20th-28th, 2019, including during services for the feast of the Dormition. On the evening of August 20th, the PaTRAM Institute Male Choir will be singing near Holy Protection Cathedral to greet the icon as it arrives in Saratov.

PaTRAM will hold a press conference regarding this special project on Thursday, August 22nd, at the Saratov Conservatory at 5pm before the concert, and include a question and answer period with Alex Lukianov, co-founder and CEO of PaTRAM, and Maestro Vladimir Gorbik and Katya Lukianov, co-founders of PaTRAM.

Alexis Lukianov, co-founder, chairman, and CEO of PaTRAM Institute said, “This is the next step for our organization. We are trying to replicate our success from our earlier CDs, but with different composers and prayers. Originally, we had planned to focus on just one composer for this next recording. But once we realized the incredible blessing of the icon traveling with us, we decided to change the repertoire to be comprised of hymns to the Theotokos to honor the Mother of God and to appropriately celebrate the feast of the Dormition right after our recording.”

PaTRAM’s GRAMMY-nominated CD Teach Me Thy Statutes was recorded in Russia in 2016 and featured both American and Russian singers. Teach Me Thy Statuteswas also named MusicWeb International’s 2018 Recording of the Year. PaTRAM’s newest CD, The Divine Liturgy of St. John Chrysostom, has consistently been in the Top 15 on Amazon’s list of Hot New Releases in Opera and Vocal since the CD was released at the end of April. Besides continuing to promote and develop the skills of Orthodox choral singers in North America, PaTRAM also views its work as a landmark opportunity to unite East and West as the organization brings together singers from different countries who share the same language, culture, and beliefs to create beautiful and prayerful music. PaTRAM seeks to broaden its partnerships around the world with the aim of introducing more people to the beauty and power of Russian liturgical music, so that their lives might be transformed through a connection to this ancient and soulful form of worship.

The mission of the Patriarch Tikhon Russian American Music Institute (PaTRAM) is to cultivate and promote the beauty and spiritual depth of Russian Orthodox liturgical arts in general and choral singing in particular, in both the English and Church Slavonic languages. PaTRAM seeks to utilize rigorous educational programs, distinctive performance events, and the latest technological tools to realize this mission.

PaTRAM is a non-profit 501-c3 organization in their 6th year of existence and headquartered in Tiburon, CA. 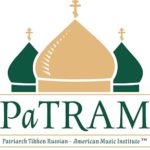