Oakland, CA, December 9th, 2019 – Today, marks the 39th anniversary of the tragic death of John Lennon — his legacy of peace and love for one’s neighbors lives on. With the blessing of Yoko Ono Lennon, the California Association of Food Banks (CAFB) continue their effort to create the “Imagine No Hunger” license plate which depicts the iconic self-portrait of John Lennon.

In remembrance of John Lennon’s life and celebration of his legacy, CAFB is offering FREE “Imagine No Hunger” license plates, available online at https://californiaimagine.com.

“Imagine is a great word to spread around and I was happy to do this because it is helping a very important charity,” said Yoko Ono Lennon.

The license plate will support the efforts of both the California Association of Food Banks and its member food banks, of which there are 41 throughout the state. An ‘Imagine’ plate is already on sale in Florida. Michael Towner, CEO of Iconic Legacy states: “The ‘Imagine’ license plate in Florida has already raised over $4.2 million for programs to help end hunger in Florida.”Nearly 1 in 8 households face food insecurity in California. For the 4.6 million Californians struggling with food insecurity, hard choices must be made between buying food and meeting such basic needs as housing, medicine, transportation, or childcare. 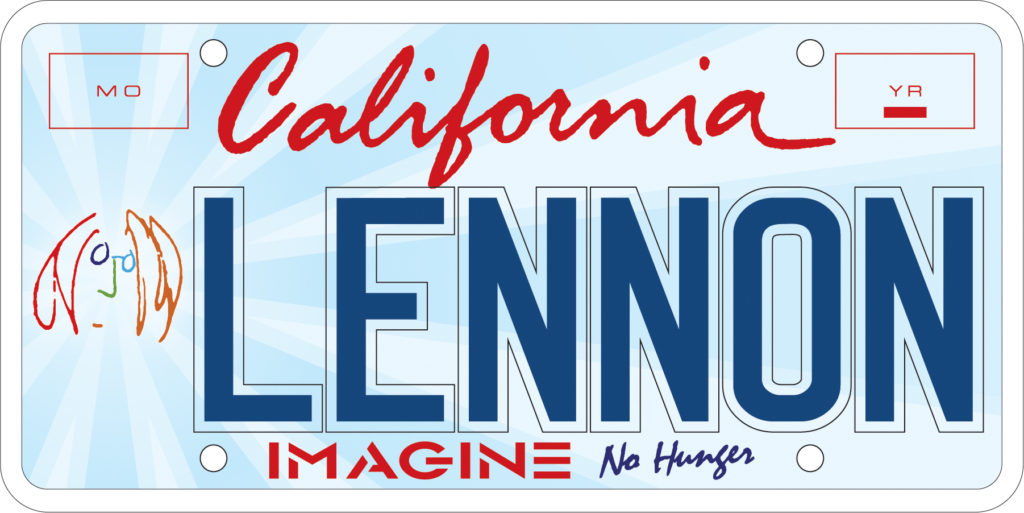 “Every person driving behind someone with an Imagine license plate will know that person is leading the way to a California absent from hunger,” states Mark Lowry, Director, CAPOC’s Orange County Food Bank, and one of the 41 food banks set to benefit from this license plate.

This effort is facing a looming deadline of January 4th, 2020, by which time CAFB and its members must complete the 7,500 pre-registrations to push the new plate into production by the DMV.

Registrants will need to provide current vehicle registration information including name, address, and current license plate number. The California Department of Social Services has sponsored the application on behalf of CAFB.

New streaming statistics reveal for the first time that The Beatles is appealing to a younger audience. The 1960s group has had 1.7 billion Spotify streams this year so far. The age-group streaming the music is not the baby boomers that fueled Beatlemania, but rather, two generations removed, including many teenagers.

About California Association of Food Banks:

CAFB partners with 41 food banks and over 6,000 local agencies. Our mission is to end hunger in California, and our vision is a well-nourished and hunger-free California, where all people have enough food to lead a healthy life. Learn more at: https://www.cafoodbanks.org/

More information, and reserve a license plate now at: https://californiaimagine.com/freeplate/

June 24th, 2022, Pittsburgh, PA – PDC LLC, a Pittsburgh based valve and actuator manufacturer, announced the launch of its line of Electro-Hydraulic Actuators to be marketed under their Magnus Force® brand! PDC will utilize Read more…