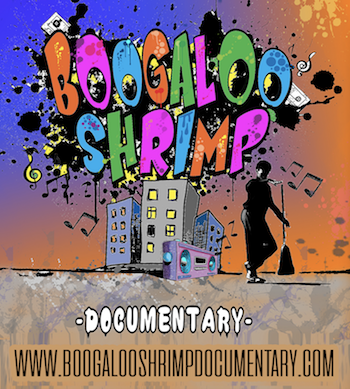 Taylor Golonka is a documentary filmmaker with two previous films already in circulation. The first, Green Guild, is a look into a medical marijuana dispensary in Los Angeles. The second, Homeless in Los Angeles, takes a critical look into the homeless problem in Los Angeles.

His latest film, Boogaloo Shrimp Documentary, is a biographical sketch of one of the legends of the 1980’s dancing fad – breakdancing.

The film focuses on Michael Chambers, an original b-boy pop locking breakdancing legend also known as “Turbo” from the 1984 cult movie, Breakin.” A film that brought the dance to a commercial world wide audience and also outgrossed the movie Sixteen Candles.

“Michael’s broom dance scene in Breakin was an iconic dance routine for millions around the world in the dance community that will go down in hip hop history,” said producer/director Taylor Golonka.

“One very important thing that people may not know about Michael Chambers is he is the person who introduces Michael Jackson’s signature move, ‘The Moonwalk’ to him” said OG Ace Rock.

Taylor has secured distribution rights with the distribution company Indie Rights out of Los Angeles. Founded by Linda Nelson and Michael Madison, the company prides itself on helping those entering the movie industry gain traction with their films.

Taylor knows this is a good fit to handle distribution of Boogaloo Shrimp Documentary after learning about them from a former distributor and within the independent movie community in Los Angeles.

“It is nice to have a company that focuses their attention on small, independent filmmakers and helps them reach maximum audiences across the U.S. and beyond. It is a strong hope that my film with catch on with those who at one time enjoyed breakdancing and the culture that went with it. I am sure there are plenty from my generation who will bust out the parachute pants when this film hits theaters,” said Taylor.

The film is set to be on Amazon Prime and all other major VOD outlets.

Boogaloo Shrimp has its own website at www.boogalooshrimpdocumentary.com Learn more about the distribution company at www.indierights.com.

About Us
For inquiries and interviews please contact Taylor Golonka at info@boogalooshrimpdocumentary.com